I seriously don't talk about the great folks at the Pen & Cape Society enough on this blog, but my group of fellow authors have done wonders in bringing more attention to many amazingly talented prose writers of super powered fiction.

I am proud to say I have joined with them again this year to take part in The Good Fight 3: Sidekicks.

This one actually takes an interesting path for me as I only have two major sidekick characters in the Quadrant Universe. Annabelle Montalvo made her debut in the debut Freedom Patton novel A Dangerous Place to Live. Backoff is a character not actually seen in any of the stories I've published so far, instead serving as a key piece of history in the backstory of Legend in the pages of F.O.R.C.E. I had to choose one or the other to write about if I was going to make this book work.

Instead, I chose both.

"Heroes Don't Retire" falls into a strange place as it actually serves as a sequel to the next Freedom novel, The Long Hot Summer, while also serving as an aside to the ongoing F.OR.C.E. saga. Basically it is a sequel to two works I have yet to release. But while it will beat both those works into print next month, I think it serves as a great jumping on point to introduce both characters.

I distinctly have plans for both in the future, but with my limited writing schedule I cannot say when they will return. In the mean time though, you should definitely check out their first adventure together as well as all the other amazing stories in The Good Fight 3: Sidekicks by pre-ordering it before the March 21 release.
Posted by Nicholas Ahlhelm at 7:30 AM No comments:


Like Father, Like Daughter is a cool little comic focused on the daughter of the world's first superhero even as she develops powers of her own. It's an intriguing high concept from the folks at Short Fuse Media, a team with several Kickstarters behind them already.

Give it a look and consider it backing before it ends in a week.
Posted by Nicholas Ahlhelm at 7:30 AM No comments:

The Jim Lee Rogue costume is such a classic, Marvel and Hasbro recently launched a new action figure version of it. While I have no idea about the identity of this cosplayer, she sure brings it to life in epic ways. 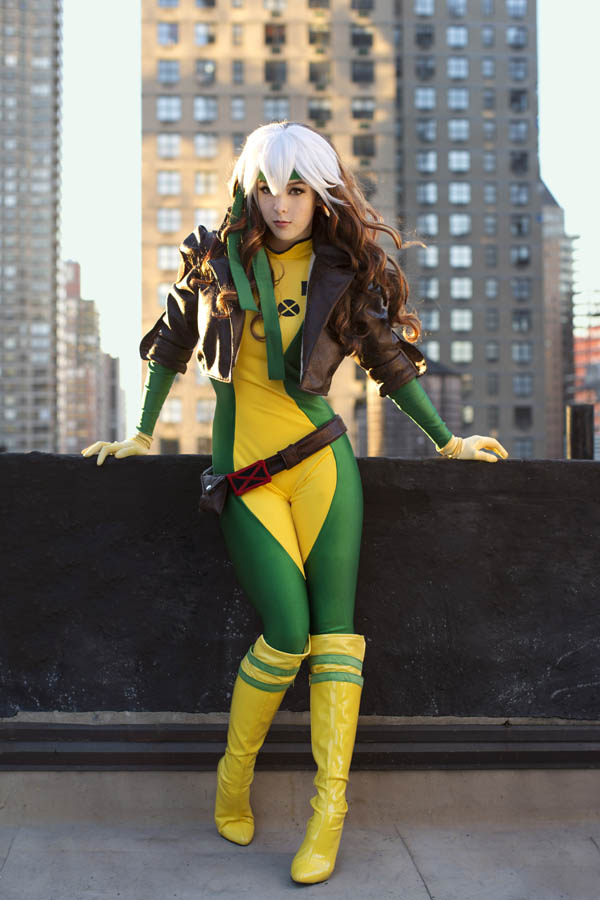 Posted by Nicholas Ahlhelm at 4:30 PM No comments:

A few words on the future (or, When real life gets in the way)

In case you had yet to notice, my time posting here on Super Powered Fiction as well on The Wrestling Weekday has grown more limited over the last few weeks. My focus for much of the last three months of last year, January and February have been mostly involved with getting myself into a better place than I have been in quite some time.

I don't talk about depression issues on here often, but with a long family history of depression (including bipolar disorder and borderline personality disorder), I have had particular challenges all through the last twelve months but they were intensified as the year ended as extended family issues seemed to overwhelm everything.

And sometimes something has to give.

I do not foresee 2017 as being a strong year for new work from Super Powered Fiction or Metahuman Press. That is not to say I will go without any releases, but I suspet most of my work will be limited to fulfilling prior commitments.

This includes a long gestating shared world anthology based on a distinctly non-Western take on superheroes, a co-edited project that continues my love for weird ideas brought to print and (hopefully) the long awaited first Pulpsploitation novel by Teel James Glenn. It will also include a handful of short stories owed to a few different publishers.

I suspect those projects to take most of the first six months of the year to complete. With the ongoing need for greater attention to home issues, my time writing and editing are far more limited. I plan to see through the release of those works before I start looking into other projects.

Some of the other works I have hinted at in recent months, such as the remainder of F.O.R.C.E, the sequel series Executive F.O.R.C.E. or the fourth volume of Lightweight are still ahead, but they are backburnered. I will give more details on their release as work returns on them.

That is not to say I am without plans. I have a big series launch planned for early 2018, one which I suspect will take up much of my energy in the new year, but one I also hope will change the face of super powered fiction for years to come. But that one is still very far away.

Posted by Nicholas Ahlhelm at 3:01 PM No comments:

The gang at HB Comics are some of the coolest cats in graphic fiction. Their book Lazerman remains a favorite of mine and their recent graphic novel Vindication is right near the top of my reading list.


Their new book Team Synergy focuses on a group of teenage girls that all have super-powers. All cousins, their grandmother trained them to use their powers and the book covers their first days as superheroes in the wider HB Universe.

What I love about the Hebert Brothers and company is they have a genuine interest in making fun comics for the masses. Lazerman was a fine example of this, but Team Synergy looks to expand their focus by making a strong female-centric title aimed at young girls.

If you like fun books with great characters and unique backgrounds, this is a book for you. Give it a look on Kickstarter.
Posted by Nicholas Ahlhelm at 7:16 PM No comments: