'Big Top Tales' gets some praise! 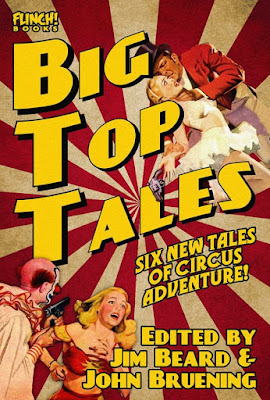 My favorite reviewer, the always great Ron Fortier took the time to review Big Top Tales in his most recent Pulp Fiction Reviews. I'm glad this great little anthology is getting some attention as I had a lot of fun with my tale of the Trapeze Artist.

He called my contribution “Fast paced with a terrific finale worthy of the Big Top.”

Check out his full review at the Pulp Fiction Reviews site. And please remember, every review you give a work on Amazon, Goodreads or abroad helps more people find that author's work. I always appreciate my great fans when they give some love to my writing!

Posted by Nicholas Ahlhelm at 7:00 AM No comments:

I am currently on a self-imposed exile from Kickstarter, but that doesn't mean I am not going to still feature projects here on Super Powered Fiction that I think are worth backing.


I supported the first volume of B-Squad without a second thought. It's an odd little funny book, created and written by Eben E.B. Burgoon which basically tells the tales of a special mission task force somewhere in weirdness levels between G.I. Joe and Suicide Squad. The team is always shifting and changing, with the rule in place that every story will feature at least one death of a B-Squad member.

Of course, while that might make B-Squad sound a bit dark, it is anything but. The second volume promises more of the same tongue-in-cheek adventures of the first book, which featured an appearance by Bill Murray of all people. Burgoon and his artists seem to be having a wild time with the series, creating a hilarious little world of their own to play around in.

And let's be honest, folks: the world needs more comics that are just plain fun.

Help make B-Squad possible and keep that dream of many more great, fun comics alive.
Posted by Nicholas Ahlhelm at 8:00 AM No comments: