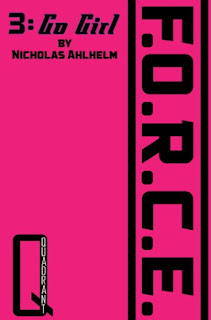 The third chapter of F.O.R.C.E. focuses on Go Girl takes the lead as she must overcome her own anxieties and fears about being a metahero with a family in order to save Baltimore in the past and New York City in the present. But with a threat that could overtake the entire world, even Go Girl might not be fast enough to save the day.

Go Girl is the speedster of the team, but I wanted to make a speedster unique to the team. The name dated back to my childhood days, but I didn't really ever put much thought past that name. With my goals of a diverse unit built around the actual makeup of modern American society rather than the homogenized teams of so many comics, I decided to create a female superhero that in many ways mirrored the relationship between myself and my wife.

Yes, I got just a tad autobiographical here. Go Girl is an African American woman raised in Baltimore, married to a small town Caucasian man. They've been together since both attended Towson University and have two children. The birth of her first child brought Go Girl's retirement, but as revealed in her premiere story, a horrible incident in the recent past brought her back into action. She works with F.O.R.C.E. under the condition of continued anonymity, making her one of the very few members of the team with a continued secret identity.

If you're intrigued by Go Girl or just want to read a piece of great super powered fiction, “A Day with the Family” continues F.O.R.C.E. with another exciting adventure for just 99 cents. Pick it up on Amazon Kindle

or for multiple formats at Smashwords.
Posted by Nicholas Ahlhelm at 7:00 AM No comments:

One of my favorite parts of creating Lightweight and the subsequent Kickstarter was finally seeing my creation brought to life in art. I started a search for a great artist that would both be affordable and provide the book with an awesome cover. Having interviewed and become online friends with Cynthia Celeste Miller and the folks at Spectrum Games, I found their regular cover artist.

The amazing Brent Sprecher was more than willing to work with me, even in the confines of a Kickstarter backed project. We came to an amenable price, but in order to get to the final cover, Brent had to do some design work.

We started with this: 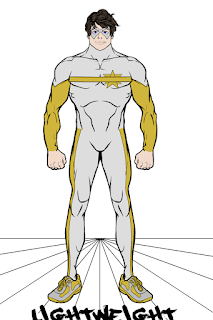 Made with the HeroMachine program, it was the closest approximation I could make to the Lightweight living in my head. Clearly the logo was all wrong, but I'm pretty sure you can see hints of the basic design there. 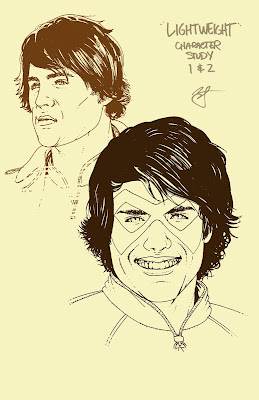 He got the basic design of the collar and mask dead on from the first try, but the build for the character was too similar to the Hero Machine design instead of the lankier build. I left the lankier build bit only in one of the numerous documents I sent Brent, so it was an easily made mistake. From this point I actually gave him an actor to work from visually, The Secret Life of an American Teenager's Ken Baumann. (Baumann since retired from acting and is now an editor and writer of note, through his own Sator Press.)

Read more »
Posted by Nicholas Ahlhelm at 2:54 PM No comments:

I am going to be honest. My family is still anything but financially well. While many folks have been incredibly generous, we still have a lot of bills waiting to be paid. In fact, while we sit at over 75% of our goal on the GoFundMe, the initial goal is at least $500 short of what we really need at this point.

So I'm going to sweeten the deal. Everyone that donates at least $20 will now get what I am calling the Super Powered Fiction Bundle. It contains all six of my published novels as well as an additional fifteen short stories, including the debut stories of both F.O.R.C.E. and Quadrant, all in the format of your choice. You can find the complete list at the bottom of this post. 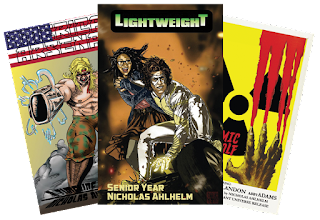 All you have to do to pick up a copy is donate at least $20 to the GoFundMe. I'll send a link to the books within a day. Click the button below to donate.

Read more »
Posted by Nicholas Ahlhelm at 12:17 PM No comments:

It always amazes me the work normal people can do on cosplays. Face paint and prosthetics are common place to some of the best costume makers out there, as can be seen by this amazing Cheetah, based on the Ame Comi version of the character. Posted by Nicholas Ahlhelm at 4:00 PM No comments: