An assignment of monstrous proportions

For me super powered fiction is far wider than just stories based on costumed superheroes. Any super powered being doing anything super powered fits the category and I often find that one supernatural element can turn even the most normal character into a larger than life hero. I caught a couple films over the last few days that fit that category.

Shin Godzilla was a fascinating reboot of the giant monster by original creative studio Toho. Produced by the same director as Neon Genesis Evangelion, the movie certainly has more depth than either American Godzilla film and most of the previous Japanese films. Using a ton of jump cuts, it chronicles the Japanese government at war with the invading menace of Godzilla. But they also are at odds with the governments of the world, ready to react violently. The movie manages to be terribly critical of the current Japanese government's slow response in the face of the disaster as well as its willingness to roll over for the United States and United Nations. It makes an interesting dichotomy, even as the film also develops a very very different take on Godzilla as an ultimate evolutionary force. If you like monster movies, this one definitely offers something different.

A bit odder yet is The Assignment, a Michelle Rodriguez film by action movie impresario Walter Hill. The movie casts Rodriguez as a male hitman forced into a female body by gender reassignment surgery. It creates a very strange film with Rodriguez dressed as a bearded man for the first third of the film until a crazed mob doctor takes out her vengeance for the hitman's murder of her brother. The plot gets hairier and deeper as the movie continues, but it manages to both be a very strange character piece and a pretty decent actioner, even if it relies a bit too much on narrative exposition to move the plot along. But it's still a unique film worth a look, especially if you're a fan of 48 Hours or The Warriors.

Overall, the films are pretty fun, so give them a look if you enjoy strange cinema as much as me.

Posted by Nicholas Ahlhelm at 4:32 PM No comments:

Mortal Kombat has long been a favorite series of mine, but it isn't always I get to share a cosplay as good as this one by Russian cosplayer Evgeniya. 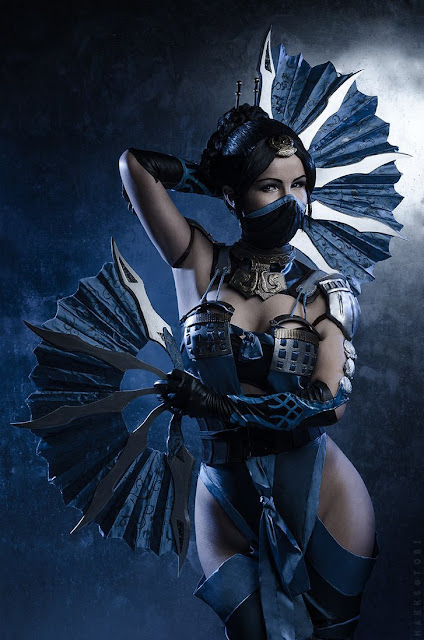 Posted by Nicholas Ahlhelm at 3:30 PM No comments:

Posted by Nicholas Ahlhelm at 8:49 AM No comments:

A few thoughts on Wonder Woman

The DCEU's Wonder Woman is the first modern DC movie to do what Iron Man and Avengers did for the Marvel Cinematic Universe. Director Patty Jenkins, writer Allen Heinberg and star Gal Gadot created a Wonder Woman far superior to her comic counterpart.

I suspect Heinberg can take a lot of credit for that. A noted television writer, he took a story by Zack Snyder and Jason Fuchs (with some reported input by Geoff Johns) and crafted a great film script that stayed true to the character while keeping the storyline fresh. While this was his first movie script, he does have a history with comics, writing the excellent Young Avengers for Marvel and the six issue Who is Wonder Woman? run for DC.

Patty Jenkins also has a bit of comic to movie pedigree. While she hasn't directed a movie since the critically acclaimed Monster way back in 2003, she was at one point attached to Thor: The Dark World. She left that movie due to differences with the MCU's creative staff. With this film in her repertoire and The Dark World still sitting as one of the worst MCU movies, it seems she might have taken a wise career path.

But Gal Gadot really brings the film home. An ensemble player up to this point, she shined as the centerpiece of the film. She brought Diana to life in a way no one has quite captured before (with all due respect to Lynda Carter.) She made the character her own, while embodying so many of the best parts of her history.

Clearly the creators (with comic enthusiast Heinberg at the fore front) drew from dozens of DC Comics runs to make this Wonder Woman. From the earliest issues of the character (where Doctor Poison is drawn), to the Perez run (where this version of Ares and the Amazons have their origins) to the New 52's Azzerello / Chiang run (where her secret origin as Zeus' daughter originated). And while all those runs had moments of triumph, the film somehow combines those elements into a whole better than its parts. It's a true achievement by the team guiding the DCEU and hopefully, the first sign of a better future for the Extended Universe.

If you haven't checked it out, I highly recommend Wonder Woman to any super-fan. It's the kind of film it is hard to be disappointed in. You can check it out through digital streaming now or pick it up on Blu-Ray September 19th.
Posted by Nicholas Ahlhelm at 8:41 AM No comments:

Last week, I worked way too hard. This weekend, outside a short shift at my second job, I had a full three day weekend and it was a glorious feeling to have time to spend with family. A visit from my brother, a mutual visit to our mom and dad and a whole lot of grilled chicken and brats made up a significant part of my relaxed weekend.

The rest of my time was spent either with a book or with a movie. I watched a couple flicks I'll talk about more in the next couple days, but I also finished a few books, including the second volumes of the Rebirth Superman and Wonder Woman.

Superman: Trials of the Super-Son was disjointed by multiple stories, but co-writers Peter Tomasi and Patrick Gleason clearly have a handle on what they want to do with the character and his family. Doug Mahnke stepped into the art chores for the majority of this volume, even returning to Frankenstein, Agent of SHADE. It made for an overall fun if not particularly eventful book.

Wonder Woman: Year One continued Greg Rucka's seemingly pointless reboot of the character for the umpteenth time. I found the need to retcon the Azzarello/Chiang history with the book distasteful enough, but the over-wrought path to her full powers and the annoying need to have her unable to speak English for most of the book just seemed like unnecessary additions to an already unnecessary story. I frankly cannot understand why this run drew such praise. It feels like a rehash just for the sake of pleasing a writer, even as several of the retcons he made are being fully embraced by the DCEU. I will sing the praises of Nicola Scott and Bilquis Evely however. Both artists did stupendous work trying to bring to life a rather flat storyline.

The best book I finished however was Hip Hop Family Tree Volume 2. This series is the first I've ever read by Ed Piskor, but he's taken the old Peter Sanderson / Mark Gruenwald tales of Marvel history to heart when he produced this series. Told in the same style as Gruenwald and Sanderson's historical back stories in numerous late eighties Marvel Annuals or the very similar Marvel Saga series, he brings an era of music to life I only had limited knowledge about until I've worked my way through these books. This volume gives the origins of Run DMC, Ice T and others, while also showing the rise and fall of several other talents in the New York Hip Hop scene and beyond. It's compelling, well drawn and makes me terribly excited for Piskor's upcoming X-Men histories from Marvel. Pin ups in the back by the likes of Michel Fiffe and Benjamin Marra just make the package pretty much perfect.

So that's what I did this Labor Day weekend. Tell me what struck your fancy about this long weekend in the comments below or on Facebook.

Posted by Nicholas Ahlhelm at 9:48 AM No comments: