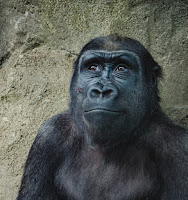 When a Chinese experiment in North Vietnam to turn monkeys into highly trained manservants went horribly wrong, the humanoid fusion of life soon to be known as Nicholas Ahlhelm was created. Denying his creators' need for personal butlers, he fled to the United States where he was adopted into a small Iowa family and raised on a steady diet of pop culture from the eighties onward.

Decades later, the true madness of his composite form set in and he entered the pursuit of the truly crazy. Now an author, he publishes novels, novellas and short stories set in a universe to which he believes in his insanity to possesses a personal connection.

Over the years, his bouts of madness has produced material for Metahuman Press, Flinch Books, Pro Se Press and Airship 27. His novels include the Lightweight series, Quadrant, Shockwave, Epsilon, Living Legends and A Dangerous Place to Live.

His nonfiction and select stories can be found at Medium for those who dare to traverse the path upon which he stepped.

He lives in a totally normal person house in Eastern Iowa where he has duped a human woman into marriage. Despite the genetic improbability, he sired two offspring.

For more on this mad creature, subscribe to his newsletter, follow him on Twitter, email him at nicholas.ahlhelm{at}writeme.com, or speak the right incantation at the witching hour on the night of the gibbous moon.