I like to peruse upcoming comic solicits in order to find new and interesting titles in the wings. This month's solicits are for comics coming in July and can be ordered by all reputable comic shops. 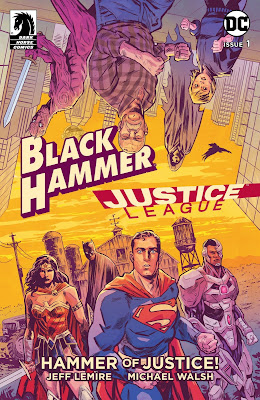 Jeff Lemire has been producing Black Hammer for a few years now and the series deserves all the acclaim it receives. But Lemire has also become an industry veteran at Valiant, Marvel and DC. Yet it still seems impressive that DC would let him run a crossover with their top tier heroes. Yet Black Hammer / Justice League is a reality. The story involves a stranger on Black Hammer farm and the coming of Starro to both realities, but details beyond that are vague.

Dark Horse is also smartly releasing the World of Black Hammer Encyclopedia the same month for anyone that is new to the characters before the crossover hits. 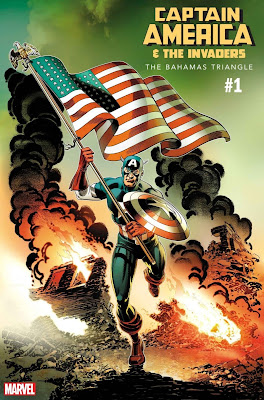 I grew up on comics in the late 80s and 90s, so when I get to see new work appear from legendary creators of that era, I'm always intrigued. But when it is two of my absolute favorite of such creators doing so on one of my favorite teams, it becomes a must by. Now I freely admit I would like to see more of the Invaders on the cover to Captain America and the Invaders: The Bahamas Triangle, but when the creative team for the period piece is Roy Thomas and Jerry Ordway, I'm sold. Thomas created the 40s super-team decades ago, just as he and Ordway did similar work at DC on the All-Star Squadron. Both books are favorites, so I'm excited to see the team come back to work on an Invaders title where all Invaders titles should be: World War II. Sadly it's only a one-shot, but I hope Marvel continues with some of these anniversary stories going ahead.

Vampirella has some great runs as a comic character. Her early appearances are gorgeously rendered by a ton of amazing Filipino artists. Tom Sniegoski created a legendary run with the character in his Vengeance of Vampirella series, but it ended before it felt like he was ready. The same can be said about Grant Morrison and Mark Millar's run a few years later. Nancy A. Collins also did some great things with the character at her new home of Dynamite. But as she debuts with yet another new series, I haven't been this excited about this character in years. That's because of the writing talents of Christopher J. Priest aboard. His plug is to take a more real world take on the character as she has to live in a world that fetishizes her. It promises to have some meta commentary on media today, I suspect, but Priest has proven an able hand with such material many times over. I know nothing of artist Ergün Gündüz, but his sample pages are impressive.

Posted by Nicholas Ahlhelm at 8:00 AM