Halloween Review: Stories From the Grave 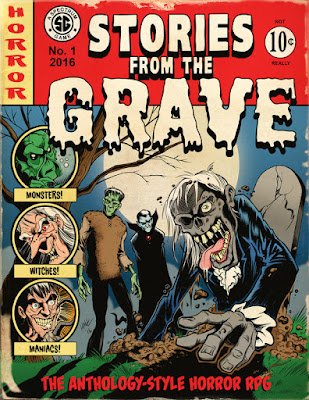 I am not one to publish a bunch of reviews. But it’s Halloween, so it seems apt to talk about a great horror themed project. Maybe my favorite scary project of the year is a new pen and paper role playing game from my friends at Spectrum Games: Stories From the Grave.

If the cover isn’t a clue, the work is directly inspired by anthology horror comics, movies and television, specifically classic EC style horror like Tales From the Crypt. Hosted by the Grave Hag, the game is designed to emulate the short quick tales of the horror comics of the 50s, 60s and 70s.

With a simple narrative system behind it, the basic premise allows the Grave Keeper (a.k.a. The Gamemaster) and the player(s) to trade control of a tale of horror or suspense. The Grave Keeper starts the basic narrative off, and the player uses his roles to try and take control of the situation. Divided into a three act structure, the goal here isn’t survival like in any other horror RPG. The goal here is great storytelling, so don’t get too attached to any player character.

Of course, PCs aren’t meant to be used more than once in Stories From the Grave. The game is designed for quick stories that allow room for two to three Installments (the game’s term for adventures) per game session. This might mean a bit of extra prep for the Grave Keeper, but with character generation basically set up to take no more than a minute or two, it’s easy to keep a session moving.

With everything included to design and run your own adventures, a low price tag and a simple but effective system, Stories From the Grave is a great one or two session game for anyone interested in a horror-filled diversion from their usual games. Writer Cynthia Celeste Miller clearly set out to emulate the genre as near perfectly as possible and it shows in her attention to detail in the streamlined 48 page package.

Don’t let me forget the art as well. Though the interior features only a few spot illustrations, the work by Bradley K. McDevitt, C. Michael Hall and Nolan Segrest perfectly captures the flair of classic comic horror. Hall’s cover is a great homage to classic EC covers, completed by design work that mimics the logo work of books like Vault of Horror, The Haunt of Fear and of course, Tales From the Crypt.

I only fooled around with the system a bit, but the collaborative storytelling aspect is incredibly intriguing to me as a writer. I could see using a similar structure if I ever wanted to create a story challenge for multiple authors.

Of course, as a huge fan of EC Comics and the Tales From the Crypt television series, the entire package is tons of fun to me. At only eight bucks, the PDF is worth checking out from DriveThruRPG. Give it a look and put a few scares into you and your friends’ lives!

Posted by Nicholas Ahlhelm at 6:53 PM

Email ThisBlogThis!Share to TwitterShare to FacebookShare to Pinterest
Labels: Spectrum Games, Stories From the Grave, Tales From the Crypt