Coming Continuing Comics 5: the one with a serial killer and a nun

Every month I peruse the comic solicits to see what I want to add to my subscription list. Triple C takes a look at the superhero books that most stand out to me or I think are well worth a wider look by everyone. 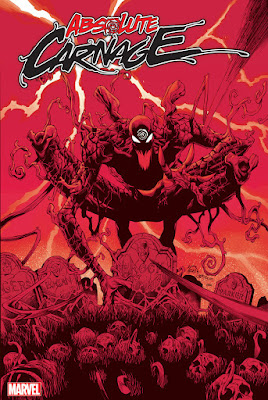 Of course, the first entry this month is pretty much guaranteed to get a ridiculously wide look. Absolute Carnage is the latest Marvel event. (Remember a year ago when they promised we wouldn't have endless events at the company? They lied.) But unlike so many other events currently running at the publisher, Absolute Carnage is a spinoff of one of the company's two best books, Venom. (If you're wondering, the finest title from them right now though is Immortal Hulk.) Venom took the symbiote concept to a cosmic backdrop and this new series continues in that vein as a powered up Carnage now seeks to kill everyone ever touched by an oozy sentient costume. With the same team that launched the current Venom, Donny Cates and Ryan Stegman, this one will likely be both mind-bending and gorgeous. 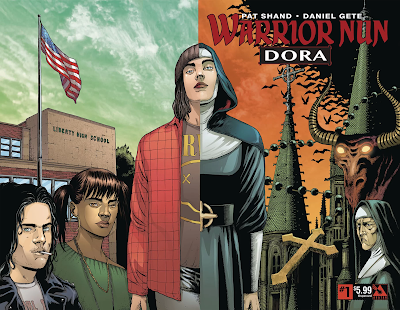 I will stand by Warrior Nun Araela as a solid, well written superhero narrative of the mid-nineties that subverted the bad girl trend to tell some great stories. Ben Dunn started it and current YA author Barry Lyga developed the character over the years into a great character with an expansive universe. But the Warrior Nun concept was eventually sold to Avatar where it wallowed for years until the announcement the property was picked up as a new series on Netflix. Now Grimm Fairy Tales veteran (and longtime novel tie in writer) Pat Shand is launching a new era of the series with Warrior Nun Dora. Aided by Uber: Invasion artist Daniel Gete (which might not be a good sign for that series finishing anytime soon ever), it looks like a darker take on the concept set deep in the 90s. 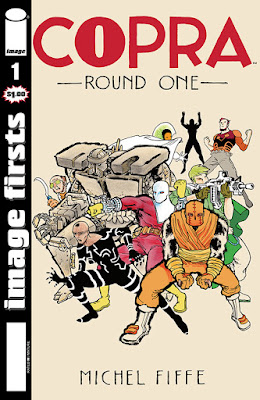 The final pick of this month is a dollar reprint, but one with a strange hybrid. Michel Fiffe has self-published Copra for several years now. A couple months back, he reprinted the trades for the series through Image. Now on the heels of the announcement that Image is the book's new home, it also gets the Image Firsts treatment. Copra #1 reprinted for only a dollar has me intrigued, especially to see how the format works with Fiffe's creative process, one that he's used a lot of matte non-glossy paper to publish. It's an intriguing proposal as the new series looms, and it will only take a dollar to find out the answer!

Over all, it's a sparse August. The month rarely has a ton of launches, as September and October are the dates when you can start debuting all your big San Diego announcements. But these three books at least are worth a read. Stop by your local comic shop or favorite online retailer and make sure you give them a pre-order!
Posted by Nicholas Ahlhelm at 9:00 AM