Influential: Spider-Man and His Amazing Friends

Patreon subscribers have now read the first two-thirds of Lightweight's return to Earth. Let's go back and look at a Saturday morning cartoon that influenced my style of superheroics.

I freely admit that Spider-Man and His Amazing Friends is not the best piece of Saturday morning television ever produced. Even by early 80s standards it was a so-so venture, but when you’re three and four and just falling in love with superheroes, it doesn’t really matter. 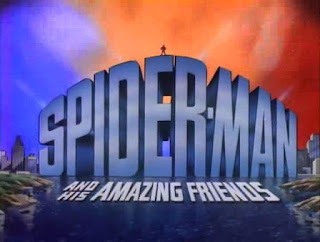 But even now, I can sit back and enjoy old episodes of the series when I find them on television or online. Because Spider-Man and His Amazing Friends made me understand that a superhero universe offers more than the simple adventures I saw on the earlier Spider-Man series or the contemporary Incredible Hulk. While Spider-Man, Firestar and Iceman could have simple adventures based around their everyday lives, they could also have bigger adventures alongside amazing guest stars, many which were completely new to me. Captain America, Sunfire, Shanna, the X-Men and a dozen other Marvel characters were shown to me for the first time in the series. I learned that Spider-Man didn’t have to be contained to local tales, but could be as big or as small scale a hero as a given adventure entailed.

It was an important lesson that I never really embraced until I started to write Lightweight and Quadrant. With both, I set out to create down to earth heroes whose adventures could span the world and the universe. Quadrant started to expand its boundaries almost immediately, but for Lightweight, it really starts in a big way with the upcoming installment, Lightweight: Beyond. The new tale takes him into the wider Quadrant Universe and will reveal much of the inner workings of the galaxy that surrounds our tiny blue word.

Lightweight: Beyond offers one other big advantage over Spider-Man and His Amazing Friends: it will never convince a single young fan that Iceman and Firestar are way more important heroes than they actually are.
Posted by Nicholas Ahlhelm at 9:00 AM